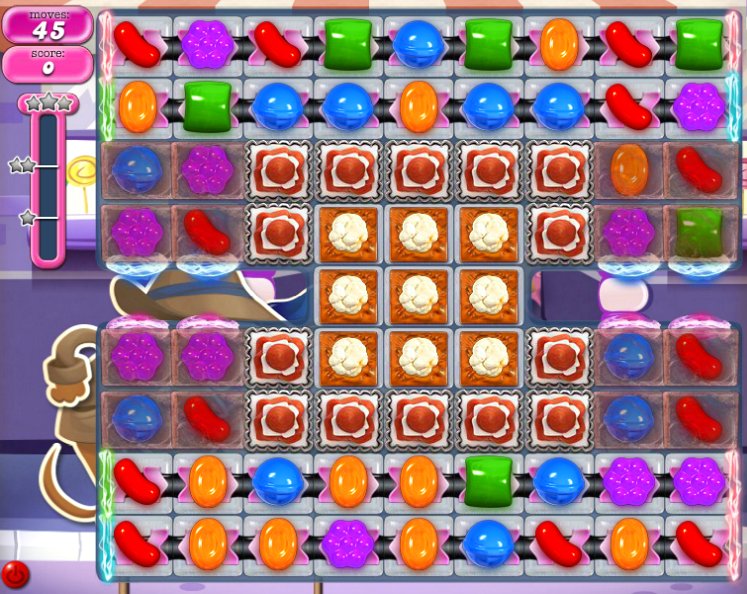 These Candy Crush Level 1270 cheats will help you beat level 1270 on Candy Crush Saga easily. Candy Crush level 1270 is the fifth level in Diamond District and the 596th jelly level. To beat this level, you must crush 75 double jelly squares in 45 moves or fewer. You have 5 candy colors and 75 available spaces. You can get a maximum of 380,000 points.

Firstly, open up the board as much as possible. At the start, do not worry about jellies. You will be clearing some of the jellies by opening up space. Use special candies to clear the popcorn, icing, and marmalade to open up access to the lower portion of the board via teleporters and conveyor belts. Once this is done, begin attacking the popcorn. Creating wrapped candies and combining two of them together right on top of the three by three square will remove two layers of each popcorn (one per explosion). Soon enough, you will have nine pretty color bombs staring back at you, ready to be used. color bombs can be switched with each other to remove marmalade, a layer of jelly, and a layer of icings. It will also shuffle the board. However, this may be difficult because color bombs may not fall next to each other. Therefore, combining a color bomb with another candy easier to create, such as a striped candy, will be as devastating for the other blockers. When you have a few moves left, there should only be a few jellies left. Simply use the remaining moves to chip off the jelly squares.

This is the third level in a hell’s cluster. The popcorn divides the board into two parts, making the level much more difficult as moves on the bottom become rare until after the popcorn is cleared. Thankfully, the player is provided with five colors instead of the dreaded six, making the creation of special candies easier. Conveyor belts may cascade candies and help the player clear jellies. However, it may destroy any special candy combinations the player is trying to set up. Marmalade and five-layered icing also block most of the jellies, causing the player to waste many moves to clear them. The jellies are worth 150,000 points, which is more than the one star target score.