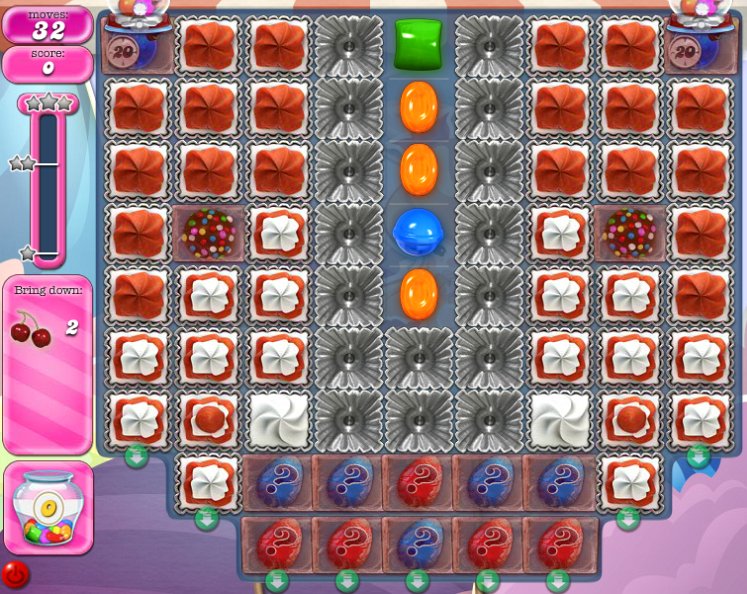 These Candy Crush Level 1521 cheats will help you beat level 1521 on Candy Crush Saga easily. Candy Crush level 1521 is the first level in Candy Canyon and the 419th ingredients level. To beat this level, you must collect 2 cherries in 32 moves or fewer. You have 5 candy colors and 75 available spaces. You can get a maximum of 300,000 points.

There are only 20-move candy bombs. So, quickly remove icing on the two sides of the board and bring the ingredients down. Okay I am adding a strategy here as from comments sections, many seem to be lost and using boosters. This one actually not that hard and is doable without using boosters at all. Just follow me as I used this strategy and was able to finish it in 3-4 tries without a single booster. Here is what you have to do: Focus on only one side of the board. Say left. Now, focus on removing the marmalade on the left bomb simultaneously freeing the color bomb and match it with blue candy only. This will remove the left blue candy bomb and the marmalade on the right blue candy bomb. Once the left blue bomb is gone, a cherry will drop. Now it will be very easy to remove the icing below this cherry so that another cherry will drop in the same column. In this whole process make sure the right blue candy bomb is still there. If you accidentally remove it before the second cherry is dropped above the first one, then the second cherry will appear on this side such that you will have cherry on both the sides of the board and the level will become impossible to beat. Remove the second blue candy bomb (on the right side) only after both the cherries have been appeared in the first column. You have to do all the above in about 18-19 moves i.e. before the right candy bomb explodes. Seems difficult but not that difficult. Trust me. Now simply remove the icing below which is very easy to do. No need to switch the cherries to another column.

The board is limited with heavy icing layers. Two 20-move bombs stuck in marmalade below the dispensers. Once removed, ingredients will come out along with even more bombs. The player is given some mystery candies and color bombs for the job, though they are hard to reach. The ingredients are worth 20,000 points, which is equal to the one star target score.